With Equal Weights the duo of Frans de Waard & Martijn Comes return to Moving Furniture Records. For this new release they took their collaboration a step further. And not only with the music, also for the artwork. This release comes with a beautiful 24 page art book by Bas Mantel.

Equal Weights is released as CD mastered by Jos Smolders in artwork by Bas Mantel.

On Equal Weights, Dutch sound artists Frans de Waard and Martijn Comes are tightening the bond of their collaboration without ever actually responding to each other. This paradox was made possible by a remarkable creative process: First, de Waard created two empty containers – acoustic canvases of a predefined length – and added his own sonic brushstrokes to them. Then, he sent them to Comes, who finished the “paintings” by filling in the blanks. What could have turned into a random collection of sounds ended up an immersive journey – thanks to a shared interest in an underlying topic. 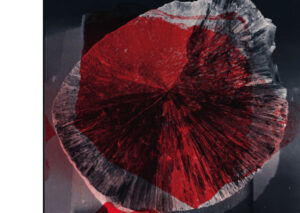 When Comes received the first version of the two long-form tracks, the old-school electro-acoustic timbres instantly put him into a very particular, sentimental mood. Topics like memory, grief, and longing came welling up. “I just felt a bit nostalgic,” was de Waard’s nonchalant response, but it sent Comes into an inspirational spiral. Nostalgia, both as a concept and a concrete pointer towards musical source materials, would turn into an unspoken leitmotif for the album.

Embedded into the compositions on this CD are ethereal, recomposed sections from the works of 16th century murderer, psychopath and genius Gesualdo; dreamy trumpet and flugelhorn improvisations by fellow Dutch musician Marcel Klingeler; as well as synthesizer leads seemingly taken straight from a 1990s Warp 12inch. “We were working within and towards a shared form,” Comes remembers, “At the same time, we were staying within our own space.”

Nostalgia is closely related to our personal perception of time. And so it can be no surprise that Equal Weights deals with time in many, both open and disguised ways – not least expressed by the fact that these pieces clock in close to the half hour mark each. That reference was also the guideline for the artwork by Bas Mantel, who arrived at the idea of using gemstones as a symbol for digging up objects from the past that have stayed underground for a long time. Once polished, they are suddenly charged with occasionally overwhelming emotions. 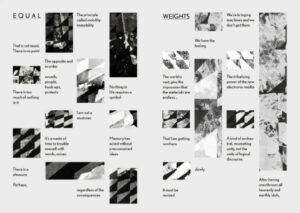 For the duo, this technique was a deliberate counterpoint to their earlier album Various Weights which was based on a highly interactive, extremely detailed and expansive process of continuously sending sounds and arrangements hence and forth between their studios. Since that release, the two had performed together as a duo several times, gaining a better understanding and a stronger sense of trust.

As a result, Equal Weights, despite its exquisite corpse approach, feels more, rather than less, cohesive, than their debut. It also, in contrast with the title, has something weightless about it – a final paradox on an album which started out with one in the first place.

These days, there’s nothing new about (electronic) artists working together remotely. Exchanging files back and forth, each iteration reacting on the previous. It has led to many fascinating albums of course, yet it has become a standard practice. Nothing wrong with that of course, but creative minds keep finding ways to keep that concept a step further so it stays challenging.

This online collaboration by Frans de Waard and Martijn Comes is an example of the surprising turns a different approach may take. As a start, de Waard created two empty ‘containers’ (each around 25 minutes long), adding some of his own ‘sonic brushstrokes’, but leaving it to Comes to fill the gaps. De Waard‘s electronic fragments had some kind of ‘old-school’ feeling about them, which lead to a feeling of nostalgia by Comes – thus defining the overall mood of the album. It’s interesting to note that this album is a follow-up to 2020s Various Weights, which was an example of the more classic way of interchanging sounds.

The first part of this album (‘Those Silences That Occur’) is perhaps the most surprising: there are some elements that I personally would not have expected here. The opening sequence features beautiful trumpet and fluegelhorn improvisations (by Marcel Klingeler), merging into immersive spacey electronics and then morphing into a charismatic choir loop for the second half of the first part. These ethereal sequences seem to be a recomposition from themes by Carlo Gesualdo (ca 1600) – a composer whose lifestyle did not exactly match his heavenly compositions, so to say. It is exactly this unique and unexpected combination of sounds that lifts this album to a unique level not often heard.
The second part (‘And There Is Nothing To Say’) takes off from the closing chord of the first part but quickly drifts into deeper and incrementally more abstract electronic ambiances – drifting off into infinity (and beyond) without losing the nostalgic, somewhat sentimental mood.

The CD (and download also) features a 24-page book with artwork from Bas Mantel presenting images of various kinds of gemstones ‘as a symbol for digging up objects from the past that have stayed underground for a long time.’ The booklet also features some quotes that may illustrate the struggle of creating: ‘That is not music’. ‘There is no point’, ‘There is too much of nothing in it’, ‘I am not a musician’, ‘It must be revised’, ‘That I am getting nowhere’. The constant struggle of the creative creator fighting self-doubt and uncertainty.
Uncertainty may be a necessary phase in the process of creation, but listening to the result there was no reason to doubt. This album can easily fill those silences that occur when there is nothing to say.

Vital Weekly, Bauke van der Wal
I know a review about any project shouldn’t be about the reviewer, yet I’ll start with a little thing about me which might explain the choice of words on this release. So here it comes (no pun intended): I have a hate/hate relationship with blowing instruments of any kind. It took me ages to make peace with the sax that Bowie uses (and yes, I am a Bowie fan); the darkness of Chet Baker and the really slow and old bluesy jazz only got to me when I was in my late 40s…    So why the hell would Vital Weekly Main Office send me this CD to review? Because it is THAT good. In the first five minutes of this album, you can still hear some untreated sounds of the devices performed by Marcel Klingeler, but Frans and Martijn start generating surrealistic layer upon layer and create gorgeous soundscapes. Wooshing and swooshing like the best Schulze albums (without the constant arpeggiators), hypnotizing environments like The Anti Group Communication’s Burning Water, treating trumpets into almost formant and vocal synthesis territory. And that is only the first track with the title “Those Silences That Occur” (where they actually don’t).    The second track – ‘And There Is Nothing To Say’, – is about the same length as the first but has an entirely different approach. Maybe the result of Martijn and Frans switching the collaboration? Or, is it a collaboration at all? Or did one of them track A and the other track B? Because in that case I think the second track has more Frans then Martijn; It’s all a bit more ‘uncomfortable’ or eerie, partially because of a lofi vibe that is hidden in the droney layers. Erratic tones are playing with the delays and a melody which is no melody suddenly seems to be part of the composition. Shivers down my spine because I get a flashback from the hospital scene out of Lucio Fulci’s ‘The Beyond’, and from that moment on the composition only evolves into something even more unearthly, uneasy, with words unspoken … *IS* there nothing to say? Or are the words merely unspoken and is it all about the absence of words … And in that case, why am I trying to verbalize my emotions?    The A5 booklet that comes with the CD (designed by Bas Mantel, also available separately) has loads of images but the middle two pages are reserved for words. Incoherent – so it seems – phrases, but they’re there, so probably they have a reason … But while going through the sentences and listening to that second track I read “A kind of orchestral, resonating unity, not the unity of logical discourse”. And now that sentence is resonating in my brain. This is one beautiful release.

Or find the album on your prefered streaming service here: https://orcd.co/equal_weights 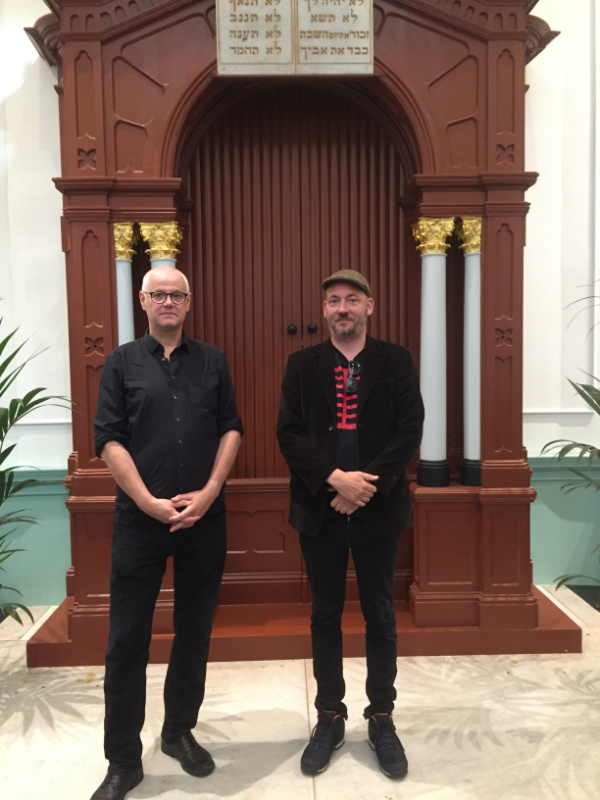 Frans de Waard (1965) has been producing music since 1984 (Kapotte Muziek, Beequeen, Goem, Zebra, Freiband, Shifts, Modelbau, etc.). In 1984 he started his own record label Korm Plastics, releasing music from Arcane Device, Asmus Tietchens, Jim O’Rourke among others. He has worked for the pioneering Dutch tape label Staalplaat (1992-2003) and since 1986 as a reviewer for his own publication Vital (now Vital Weekly), a magazine which has been an online source for underground music since 1995, and which celebrated its 1000th issue in 2015. In 2016 Timeless published in France his first book, an autobiography of life in Staalplaat titled This Is Supposed To Be A Record Label. His interests in music creation ranges from ambient to noise to what he describes as ‘silly disco music’. He has played concerts in Europe, USA, Canada, Russia and Japan, and collaborated with Steven Wilson, Jaap Blonk, Andrew Liles, Radboud Mens, Keiji Haino, Pan Sonic and others.

Martijn Comes (1979) is a Dutch composer who has a special interest in sound character in various musical traditions, with a special gravity towards electroacoustic composition.

He graduated at the academy for Digital Communications in 2004 with a thesis on live stage performance with the aid of digital media and studied Composition for Film with Jurre Haanstra at the Conservatory of Amsterdam (2010).  Next to performing locally he performed and held workshops in Europe and beyond: Athens, Madrid, Valencia, London, Paris, USA and Canada, and has been the mastering engineer for independent labels and artists including Bedouin Records.

His work for Carillon ‘EANN’ was premiered on the St Bavo Church in Haarlem, and was selected as the opening piece of the prestigious LE GUESS WHO festival, Utrecht in 2017. After this he was commissioned by the Gaudeamus Festival to write ‘MOTHER’, a piece for the Dom church Carillon in Utrecht. ‘Radiance, Time’ for carillon, tape and electronics was premiered 30/11/2019 as a commission from the Rewire festival.

His work has been broadcasted world–wide on local as well as national stations like VPRO Radio 4, Radio 3 Spain, Polish and Norwegian National Radio, and RTÉ Ireland. He worked with filmmaker Thomas Mohr his ‘Resonance’ & ‘Learning curve’ films, which both were curated by the LIMA Media Art Platform (former NiMK). ‘Resonance’ was part of the Best Of selection of the Ars Electronica festival in 2010.

He has written critiques for broadcasting network the VPRO (Vrije Geluiden) and he was an avid curator of concerts and host of two national radio shows in the Netherlands, ‘Kraak Helder’ and ‘Inventions for Radio’, both featured on the Concertzender. Both programs focussed on promoting innovative electro-acoustics and broadcast-art. Collaborations include the New BBC Radiophonic workshop.

Recent collaborations include Giulio Aldinucci, Saverio Rosi, Frans de Waard, Lukas Simonis, Hessel Veldman and he has collaborated in the past with artists such as Thomas Mohr, Martin Reints, Orphax, Mitchell Akiyama and Twine 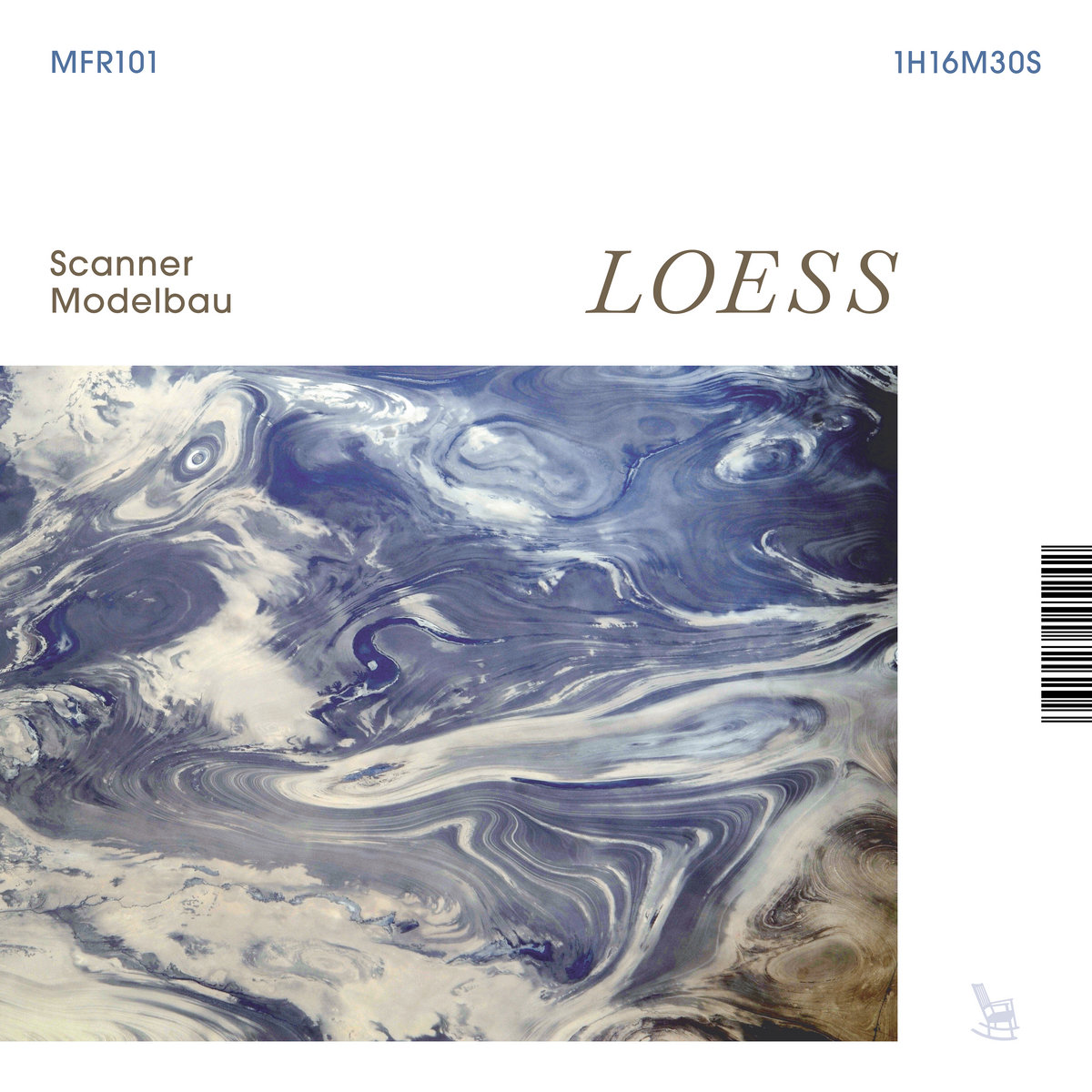 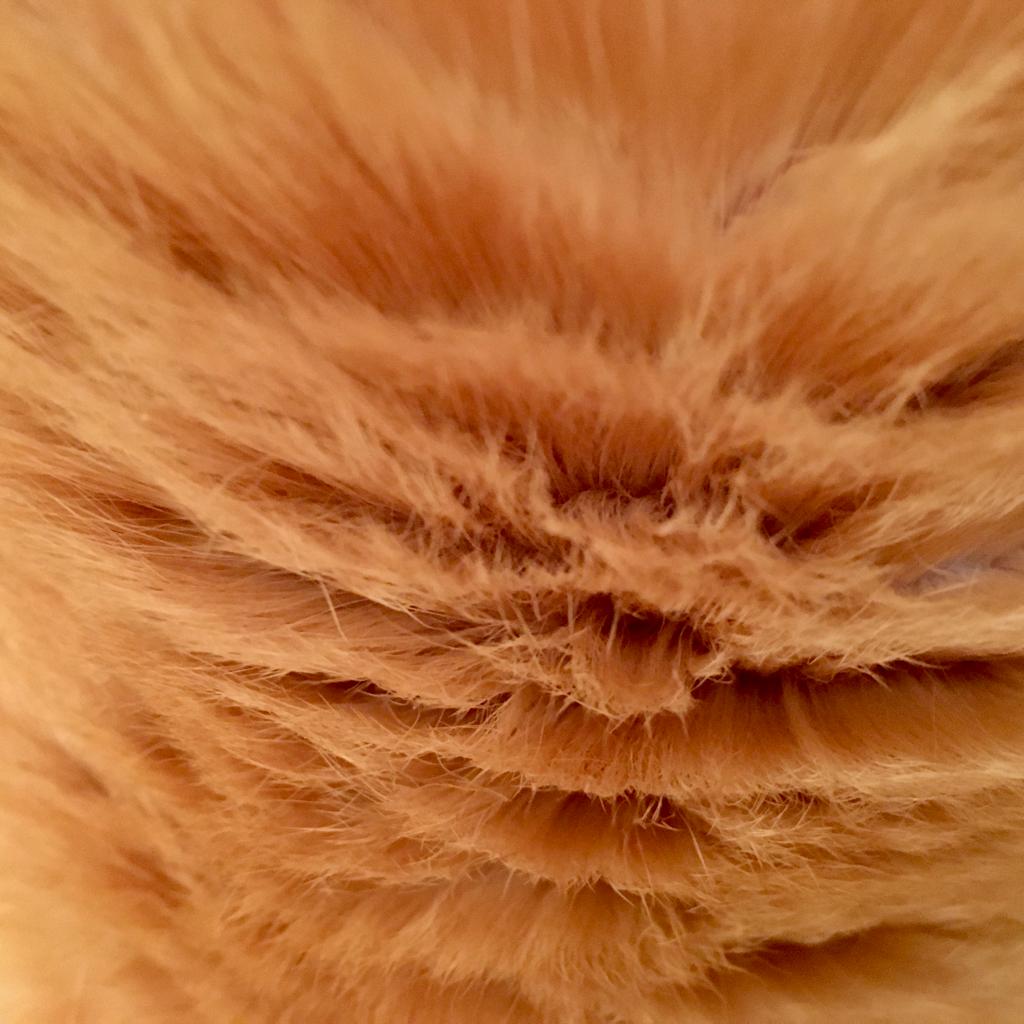 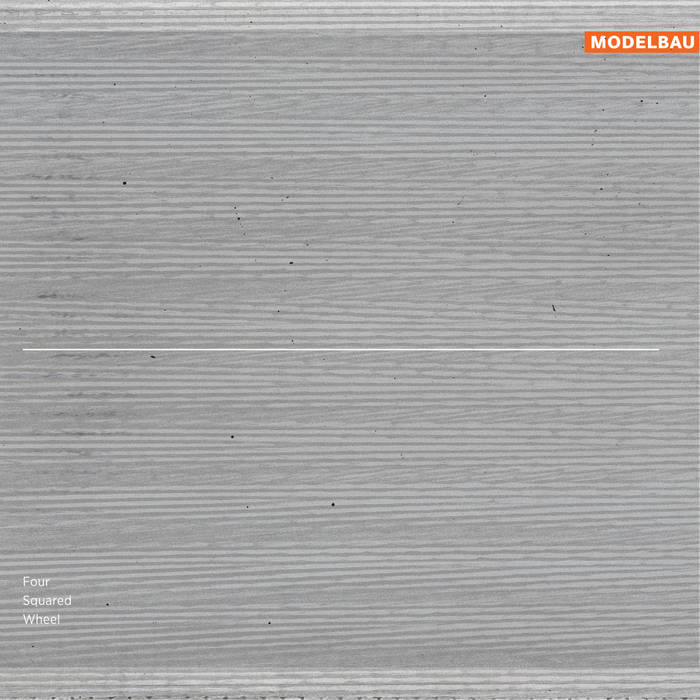