Various Weights is the first time the duo of Frans de Waard and Martijn Comes come together to present work.

On this album, their uniques styles are combined, where they work with each others sound materials to create truly unique compositions.

In sound art, concepts often take precedence over the actual music. Here, there were none. For their first collaboration, Frans de Waard and Martijn Comes decided on a strikingly simple approach: Each artist compiled a pool of sounds for the other to use as a point of departure. Comes worked with various analog synth- and field recordings by de Waard (including, among others, a Korg MS20 and Koma Field FX). The latter was sent a processed stylophone recording, a sample loop as well as recordings of the Web’s first Software-Defined Radio by the University of Twente.

The results, now released as Various Weights, are two epic and immersive pieces. On “Boundary of Intersections”, Comes focuses on  deep sonorities and harmonics, developing his materials into a mind-expanding drone zone. De Waard’s “There are no two pianos” is more subdued, hovering mysteriously at the cusp of acousmatic research and sonic minimalism. Both pieces share a slightly uneasy, surreal feeling – perfectly captured by Bas Mantel’s artwork, which was a direct response to the sounds contained on the disc. 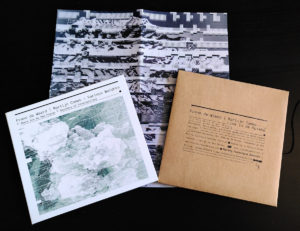 The bonus-CD to this release, limited to 50 copies, contains a full 35-minute performance by both artists at De Ruimte Amsterdam after the project had been completed. Magically, the music appears to be a direct continuation of the album tracks. As such, Various Weights ingeniously juxtaposes live- and studio techniques, solo and duo work, spontaneous improvisation and meticulous composition. That, whether the artists intended it that way or not, probably makes it a concept album after all.

CD limited to 150 and digital available our webshop.
The limited special edition of 50 copies is sold-out.

Or find the album on your preferred streaming service: https://orcd.co/various_weights