After a fruitful collaboration for the Moving Music compilation Matthijs Kouw & Gagi Petrovic took on the next step and worked on their debut collaboration releases Recalcitrance.

The album is released as double CD mastered by Jos Smolders and comes in beautiful artwork by Zeno van den Broek and design by Rutger Zuydervelt.

Philosopher of science Isabelle Stengers has studied the operations of states and their mobilization of technical practices to serve a presupposed general interest, which involves the production of rules and norms. Such rules and norms are blind to forms of knowledge that are denigrated as ‘local’ and ‘traditional’, and feature the correlative elimination of what does not conform and cannot be standardized – in other words, what is recalcitrant to objective evaluation. Anything that resists subsumption to technical rationality is seen as a threat to public order (Isabelle Stengers, In Catastrophic Times: Resisting the Coming Barbarism, pp.73-4).

The eight tracks on ‘Recalcitrance’ examine abstract topics that range from metaphysical speculation and psychological investigation to reflections on the process of creation itself. Taking a shared set of source sounds as their starting point, Matthijs Kouw and Gagi Petrovic invite listeners to trace the common sources of their pieces and to become recalcitrant themselves by experiencing the compositions in ways that defy what Stengers describes as technical rationality. Recalcitrant subjects ask new questions, thereby allowing the currently dominant reductionist mindset obsessed with productivity to be unsettled by space for reflection and quiet contemplation.

The first time these two composers worked together was for the Moving Furniture compilation ‘Moving Music: Sounds From The Rocking Chair’ (Vital Weekly 1217), and as they enjoyed the experience so much they decided to continue working on a shared set of source sounds. “The eight tracks on ‘Recalcitrance’ examine abstract topics that range from metaphysical speculation and psychological investigation to reflections on the process of creation itself.” I am not sure if I understand the title and how that works with the music, but, then, I am not much of a philosopher myself. From the two, I know the work of Matthijs Kouw best, his various solo works (as MvK) and collaborations with Radboud Mens and Modelbau. He works with modular synthesizers, field recordings, software and objects whereas Petrovic is someone of whom I heard one release (Vital Weekly 1111) and I believe much of his work is done in the digital domain of the laptop. It is not easy to spot the shared source material here, but maybe it is because of the extension of processed music. In Kouw’s three pieces, he does what he does best and that is creating long-form drone pieces, with a mass of sustaining dark sounds, slow development, and atmospheric intensity. In ‘Absorbance’, he adds some sort of acoustic rumble, or a voice perhaps, maybe pushing it a bit to the foreground, changing the menu minimally. For all I know I wouldn’t have minded all of this to be a bit longer than the thirty-three minutes it is now. Petrovic’s disc is thirty-five (so, technically all of this could have fitted on one CD) and in his five pieces, he is a bit more varied, combining drones and tones, clustered sounds and rhythms. Another difference is that Petrovic has a slightly more musical touch to his music, such as the melodic element of the very short piece ‘Remnants’ or the stuttering Ovalesque’s rhythm of ‘Depressant’. As I like the unified approach of Kouw, I also like the variety on display in the music of Petrovic. All together this collaboration worked quite well, offering some great results from both players. (FdW)

Double CD limited to 200 or digital available in our webshop. 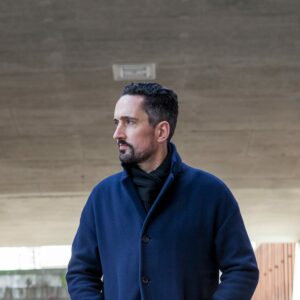 Matthijs Kouw is an experimental musician based in The Netherlands exploring the relationship between movement and stasis. Using analog synthesis, software, field recordings, and recordings of various objects, Matthijs combines long-form drone with elements from acousmatic music, noise, and microsound. 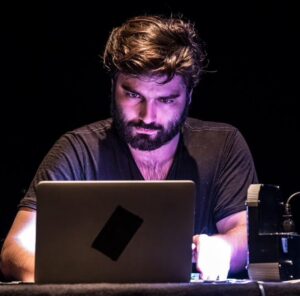 Gagi Petrovic is a composer, performer producer and teacher of music. As a musician and sound artist he mainly works in performative settings, with a versatile taste and diverse expertise. He writes pieces and songs with elements that are acoustic and electronic, intense and intimate, which are something between odd and familiar. Aesthetically his work balances in the grey area of contemporary composition, digital electronics and alternative pop. Conceptually his music often covers themes revolving around oppression, isolation, destruction and what it means to be free.

The use of technology often plays a big role in his creative process, as well as his preference to keep pushing music forward. As a composer he mostly works in an autonomous fashion, where research in freedom of expression and playfully exploring boundaries guides his creative decisions. He has received commissions from organisations such as Gaudeamus, Fringe Festival, Rewire and LeineRoebana, asking him to write for soloist and small ensembles. He releases electro-acoustic albums and performs own works with his custom-built instrument GEST and as a singer-songwriter. Frequently, he produces music for other media too, like contemporary dance, theatre, video art and documentary. He has a special interest in how music moves us both physically and mentally; how such abstract languages enable us to reflect on a particular sense of reality, escape it or even question it.