For the first time, the great musicians Jos Smolders and Jim O’Rourke come together to present you their work Additive Inverse. A fruitful collaboration, matching to its expectations.

The album is released as CD and comes in beautiful artwork by Rutger Zuydervelt.

What if sounds were to fold in on themselves? Quite quickly after being ‘born’, even. Only to be released back into the ‘normal’ world of linear projection and moving waveforms from a resonant source to the ear drum to hearing and listening, some album length later?

Through a looking glass of sorts, as if emerging from an anechoic chamber through the backdoor. From absolute silence into all hearing, all sound anew, flooding over, rushing in. A ghostly aural universe with perspective shift, familiar knowns flipped upside down and inside out.

Could this inverted aural space be the one which is always there to begin with, like the inverse of an acoustic emission – the literal backside of the speaker? The inverse as diametrically opposed or quintessentially other, but with identical value and properties. The hitherto unheard side as sine qua non to the heard.

This collaboration between Jos Smolders and Jim O’Rourke offers a unique opportunity to investigate the intricate, topological complexities of (deep) hearing and its inverse; an exploration into the very essence of sound herself.

Do these two heavyweights need an introduction? Can I assume the whole world knows Jim O’Rourke? And that Jos Smolders is perhaps not known to the whole world, but at least to more than a few readers of this rag? Less known, perhaps, is that O’Rourke holds the second LP by Smolders, ‘No Is A Monocle’ from 1990 in very high regard and ranks it in his all-time top 20. It should be no surprise that these gentlemen worked together. I am a bit in the dark as to the actual proceedings behind this, but maybe there is some playful obscurity here?  Smolders is an advocate of all things modular for a couple of years, and I have no clue what O’Rourke prefers as a working method. I believe I heard pretty much all the works he released on his Bandcamp page, and enjoy them all and yet, I have no idea what it is that he does, but I would believe he too is a man of modular work. Field recordings are something that they also have in abundance. Birds, traffic and people talking pop up at various moments on this forty-minute piece. Like I wrote, I have no idea who did what here, the end mix, or how the roles were divided. This is a piece of musique concrète; sounds are treated with electronic means, and in any instance, we hear them together or divided. These are placed on a timeline and organized so that, as a listener, one keeps listening. That is the act of composing. It is, to be honest, that simple. The listener is taken by the hand and invited for a journey through sound; space and time. You are never too long in the same spot, as things move with quite a steady pace; nothing hurried, nothing slow. Sometimes the music is nearby, sometimes far away. It is like leaving through a picture book; there are familiar pictures, of things you recognize and there are abstract images, new pastures to discover. All of this happens in this piece, which I had playing on repeat for a while, and each time I heard something new happening in here. This is an excellent piece, but perhaps you knew that this was coming at the end of the review. I am a big fan of both composers, so it can’t be a surprise. (FdW)

CD limited to 200 copies, or digital available in our webshop. 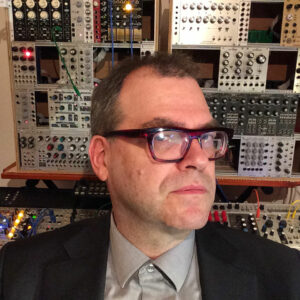 I studied architecture at the Technical University in Delft during the early 1980s. During this study I became more and more involved in experimentation with music and sound, sonic phenomena, and music history (with a focus on electronic and electroacoustic music). Sharpening my artistic beliefs by experimentation, study of music history, correspondence and conversations with composers, writing essays, reviewing concerts and musical releases I came to the decision that architecture had no place in my future life. I toured the country and parts of Europe with electroacoustic ensemble THU20 and released my own music through various (underground) channels.

Although most of my work has been solo, I have also collaborated with other artists such as Atty Bax (music for performance), Janetta Adriana (music for film), Antje Guenter (technical advice for sound installation), Mark Lyken (production for sound installation), Alexander Korsmit (music for an exhibition), Zeno van de Broek (post-production), Frans de Waard, Wouter Jaspers and Roel Meelkop(improvisation performances).

Jim O’Rourke is an American composer and musician based in Japan. He is known for his diverse solo output as well as his wide variety of collaborations. An accomplished musician, influential and imbued with an aura of mystery.
https://steamroom.bandcamp.com/