Jeremy Young presents his work Filaments as part of the Eliane Tapes series. Music inspired by and dedicated to Éliane Radigue.

Eliane Tapes is a series of music dedicated to the vast amount of work and the huge influence by Éliane Radigue.
For many musicians working in the field of drone (a term Radigue does not use for her music) and other forms of minimal music someway, known and unknown, the work of Eliane Radigue is an influence on what they are doing. With her work she did so many groundbreaking things that in modern electronic and electro-acoustic music her influence can’t be ignored.
All music in this series is presented as tape releases and downloads. We want to release it on tape because it used to play a major role in Eliane Radigue her early music.

For Filaments, I used a 1968 Heath EUW-27 sine generator to create a series of overlapping tones that were recorded to tape. While being played back, I added a lower frequency sine wave run through a ring modulator and slowly rode the pitch shifting dials in real time, improvising alongside the playback. “Filament I” is broken up into three controlled parts, Part I is led by the interaction of the first grouping of tones, Part II is led by subtle shifts in the ring mod, and Part III sees active interaction and an attempt to balance both with the addition of the microshifts in frequency as a result of the tape machine’s old motor and belts having to pull the increasingly weighty take-up reel. “Filament II” is a more freeform exploration of the same processes, but with the addition of a phaser.

I am not a synthesist, but I have a bit of an obsession to run pure tones and waveshapes from my various function generators through tape. And these old machines love doing the work as much as I do. One of the reasons I’ve always been drawn to the pioneering work of Éliane Radigue is because I share her “forest” view of longform synthesized work, as opposed to the “trees” view, getting distracted with knobs, filters, micro-perfections and endless possibilities which ultimately lead to a more fragmented approach and final product. This piece is inspired by and attempts to somewhat reimagine Radigue’s 1973 piece, Transamorem – Transmortem.

For my 2013 work, Chants Beneath the Bed of the Furnace Brook, also heavily inspired by Radigue but with less precision paid towards recreating her working methodology from the early 1970s era, the “forest” view was transposed to more of a “river view”—which is to say, seeing the piece as a whole, but with an ear towards movement and flow. Filaments, on the other hand, tries to focus on stillness. As such, one of the things that the process of executing this work has made evident is just how skilled and delicate Radigue is at keeping all of the frequencies at play controlled, and attenuating their desire to wander. Whenever I work with stacked sine tones, their playful auditory interaction via binaural rhythms and jarring distortions caused by cent differences is evident in perception always. It takes great care to keep it all together, especially when tape is involved. This piece has made me appreciate Radigue’s sophisticated stillness much more, and in particular, Transamorem – Transmortem.

CS limited to 100 copies available in our webshop

Or find the album on your preferred streaming service: 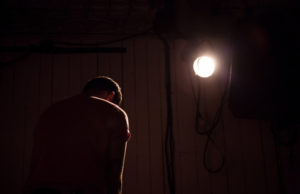 Jeremy Young is an American sonic artist, improviser and creative strategist living and working in Montréal, Canada. His creative work includes instrumental and electro-acoustic composition for recording and live performance, reel-to-reel tape collage, sound-poetry and audio-visual scoring. His main interests as an artist lie in the analogue treatment of surface-based audio (piezo mic’d objects and surfaces, manipulating tape and tone via texture and voltage) and promoting the notion that both the audio signal and the medium on which it is recorded, edited and played back, should equally contribute to the creation of a sonic narrative, an underlying principle of musique concrète>. For this reason, Jeremy’s live performances feature no digital equipment or processing. He has performed and released material throughout Europe, Asia, the US, UK and Canada.