We could already hear Dario Calderone on the LP Foliage by Elliott Sharp, but now his back to team up with Claudio F. Baroni to perform his work Ursae Minoris. Three new works for double bass.

Ursae Minoris is released on CD mastered by Micha de Kanter, and comes in beautiful artwork designed in line with the Contemporary Series by Rutger Zuydervelt, with extensive notes by Albert Manders

A constellation is a construct of perspective. Unfathomable fireballs ripping apart and reconstituting atoms, separated by millions of light years in all directions, are flattened into two dimensions by the human eye. From the slightest suggestion of line and form, the mind gathers them together into objects, seeing in them figurative outlines or distinct cultural reference points. Depending on one’s geographic location and culture, these groupings and their associated imagery can vary wildly. Despite being completely outside of human time and dimension, the stars are minimized and abstracted by distance and then reconstituted by social construct. This act of mental agility serves to make some small sense of the darkness around us and to serve as a memory aid so as to keep a grip on our place in the world.

As musical beings we might also wonder: What does a constellation sound like? Would we also find some meaning or a sense of place in this sound? How does a change in our observation change our reality?
With his Ursae Minoris, Claudio F. Baroni does not strive to give us direct answers to these questions. He begins to employ this process of perspective transformation, aurally converting a two dimensional abstraction of stars into points on a grid and then using this ‘data’ to generate the music, which leaves the final step of recontextualizing to the performer and the audience.

The title refers to the constellation Ursa Minor, which was ‘created’ by the Greeks around 600 BCE out of a portion of another constellation. In Latin and in the colloquial names in many European languages it means Lesser or Little Bear. It is commonly referred to as the Little Dipper in North America. Pointing the way to the North Star, this is one of the most important and well known constellations in the Northern Hemisphere.

Ursae Minoris, meaning ‘of Ursa Minor’, is the title of this work because in this album we encounter this constellation not as a singular instance but as an evolution of multiple perspectives to ruminate upon. As our view of the stars changes with time and place, the three movements of this piece each offer a different aural interpretation.
While working on his string quartet Perpetuo Motum, Baroni happened upon the diaries of Ciriaco d’Ancona (1391-1455), an Italian humanist, textile trader, and antiquarian. Within these diaries are maps of constellations that d’Ancona used to navigate at sea. He is sometimes called the ‘father of archaeology’ as he was one of the first Europeans to collect objects from ancient cultures systematically. Driven by his curiosity, he decided to depart from southern Italy across the Mediterranean to Egypt, Greece and throughout the Aegean Sea. D’Ancona relied upon Ursa Minor to locate the North Star in these travels.
The score of Ursae Minoris is based upon a celestial map centered around Ursa Minor. Using a similar process to one he used in writing Perpetuo Motum, the musical material was determined by a direct ‘transcription’ of the points on this map into predefined variables such as pitch and volume, transforming the stars into musical ‘events’. With the pitch material settled, Baroni explored other musical aspects.

Each movement focuses upon a specific technique of sound production. The first consists of short percussive sounds, especially those produced by tapping the metal end of the bow (called the screw) upon one of the strings. Constantly adjusting the placement of the screw and the length of the string, we are treated to a richly nuanced catalog of these tiny explosions. In the second movement, constant slow glissandi (pitch-sliding along the string) are played up and down on one of the strings as if orbiting around the gravitational pull of its neighboring string, which holds steady to one pitch. The last movement is entirely constructed of one long and shifting bowed tremolo (a shaking of the bow) resembling a trembling comet appearing out of silent space, grazing the ears with a roaring distance and disappearing back into the void.

While his single-minded use of instrumental technique can be uncompromising, Baroni leaves room for spontaneity in other aspects. Continuing the journey metaphor, the score consists of variable paths from which the performer can choose whichever routes and sidetracks they fancy in the moment, rendering each performance unique. Also striking is Baroni’s use of electronics as a way to deepen and refract the natural sounds of the instrument. The subtle use of a loop station gives rise to many layers of the already existing acoustic sound world, expanding it without injecting outside influences. This leaves one quite often wondering if there is just one bassist making all that sound or if there is a sky full of them.

Baroni has spent the last 10 years sounding out the depths of personal instrumental expression with his SoLo compositions. Ursae Minoris is the seventh piece in this ongoing series, each of which focuses on the unique qualities of a different instrument. Central to his process in this series is an extended collaboration with the performer to discover distinctive sounds from the instrument. He is not interested in fresh instrumental techniques for their own sake, simply to sound new or shocking, but because this is the terrain where there are more layers still to be explored. Baroni worked extensively with bassist Dario Calderone over a long period, taking time to form each movement of Ursae Minoris. Calderone’s complete commitment to this kind of music is evident in the intensity and detail of his playing. For example, in order to endure the brutal, endless tremolo of the 3rd movement, Calderone had to reinvent his bowing technique. Throughout the piece he latches onto the essence of the music and gives it a constant drive.

Forget for a moment the title and all of this background information. One doesn’t need to know anything about this composition’s connection to the stars to hear the force of the music or to feel the determined searching of the exposed performer. Baroni studiously avoids making specific aesthetic or cultural references in his music. He creates a closed sound universe with its own scale and physics wherein we can surrender to being propelled through this singular abstraction.
In the end we may be left to wonder: Where are the lines between natural phenomena, sound as sound, fragile and situated perception, and conscious interpretation? How much does each of us feel the urge to find some recognizable form and meaning in the sounds of these little points on a graph? Or we may just go along for the journey, leaving our mind’s universe behind.

CD limited to 200 or digital available in our webshop. Or find the album in your preferred streaming service:

Claudio F.Baroni is a composer specialized in experimental music. His work can be described as a systematic approach oriented towards investigating the nature of sound and the passage of time. Since 2001, Baroni has worked as a composer receiving numerous commissions and performances from among others Maze ensemble, The Barton Workshop, Slagwerkgroep Den Haag, Compagnie Bischoff, Maarten Altena Ensemble, VocaalLab, Asko Kamerkoor, Modelo62, Nieuw Ensemble (Netherlands), Piano Circus, (U.K.), Opera Nova Ensemble (Switzerland), Champ d’Action (Belgium), Ensemble Integrales (Germany), string quartet Prometeo (Italy), as well as writing for ensembles more unusual instrumentations for specific projects and festivals. Baroni has also collaborated in many multimedia projects with artists from different disciplines including Reinaldo Laddaga, Fabian Marcaccio, Adi Hollander, Joost Rekveld, Prannet Soi and Ana Piterbarg, among others. Recent honors include an artistic residency fellowship from Civitella Ranieri Foundation in Umbertide, Italy. He studied piano and sonology at the Universidad de Humanidades y Artes de Rosario, Argentina, and composition at the Royal Conservatory in The Hague, the Netherlands with Gilius van Bergeijk, Clarence Barlow, Martijn Padding and Louis Andriessen. Baroni lives and works in Amsterdam, The Netherlands. 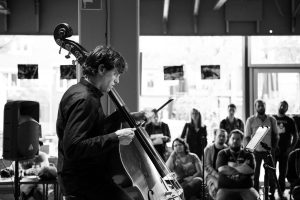 Dario Calderone studied double bass with Massimo Giorgi, Franco Petracchi and has been one of the few pupils of Stefano Scodanibbio. He is advocating new music since almost 20 years, having performed hundreds of new compositions for solo, chamber music and ensemble in the major festivals of the world. His most interesting solo projects involve a rendering of the famous Voyage that never ends of Stefano Scodanibbio, Giorgio Netti’s composition UR, 2 riti per contrabbasso, and many compositions written for him by composers such as Peter Ablinger, Peter Adriaansz, Claudio Baroni, Silvia Borzelli, Bernhard Lang, Yannis Kyriakides and Helena Tulve.From 2009 to 2019 has been the bass player of the Nieuw Ensemble in Amsterdam. He is member of Nieuw Amsterdams Peil, Trio Feedback, and of MAZE. He has recorded a number of CDs for different labels, among which Kairos, HatHut Records, Unsounds, Attacca Records, Moving Furniture Records, Stradivarius and Wergo. He has been giving masterclasses regularly at the Impuls Academy in Graz, The Luzern Festival Academy, and the Conservatory of Amsterdam. Dario Calderone plays on a Chanot from the beginning of XIX century and on a new 5 string bass by Kanzian&Traunsteiner master Luthiers in Vienna. 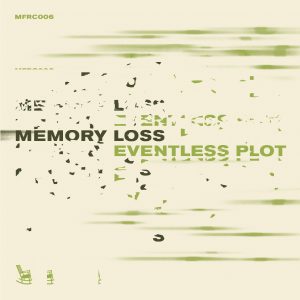 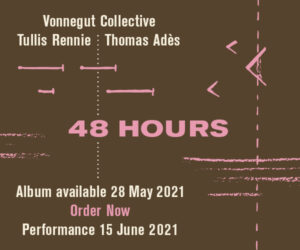