Finally after quite some time the first proper CD by Orphax is out now. 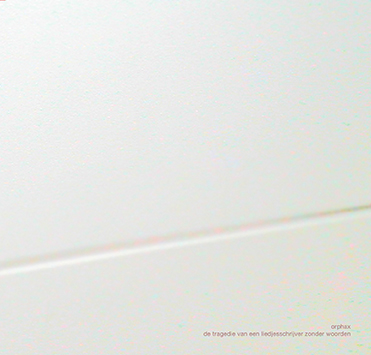 The CD is available for 10 euro excl. shipping and limited to 300.
Buy it here: Bandcamp

“De tragedie van een liedjesschrijver zonder woorden” (The tragedy of a song writer without words) is the first normal CD by Orphax. This album contains music that has been written between April 2005 and July 2007 and retouched again in 2008 and 2010. The period these songs were written was one with many transitions in the live of van Erve. It was the end of his student years, the begin of his working years, a period where he struggled with an at that time unknown disease, a period where he was searching for answers to questions he didn’t know. Inspired by this he wrote these wordless pieces.

The music on this release, at first planned for release in 2011, shows yet another look into the ever expanding work by Orphax. Even more than his other work this one is dealing with small details in the composition creating an environment that feels comfortable but at the same time grabs you by the throat. The music goes from minimal droning sounds to isolationist soundscapes and experimental ambient moods.

Orphax is the project by Sietse van Erve, born in Tilburg, living in Amsterdam, The Netherlands. Orphax works in the field of experimental electronic music once started out with ambient music slowly incorporating drone elements he now has a focus on minimalist music and lo-fi droning sounds. With every release he tries out new ways to get to his goal to create a psychedelic mind influencing atmosphere.

So far he has released several CD-R releases both private as on small labels such as Cut Hands and Verato Project, Broken20 and Moving Furniture Records.
In the past he was performed and worked with artists such as The Village Orchestra, Jos Smolders, and Erstlaub. He also shared the stage with musicians such as Charalambides, Sindre Bjerga, Zebra (Frans de Waard & Roel Meelkop), Staplerfahrer, Dirk Serries and many others.