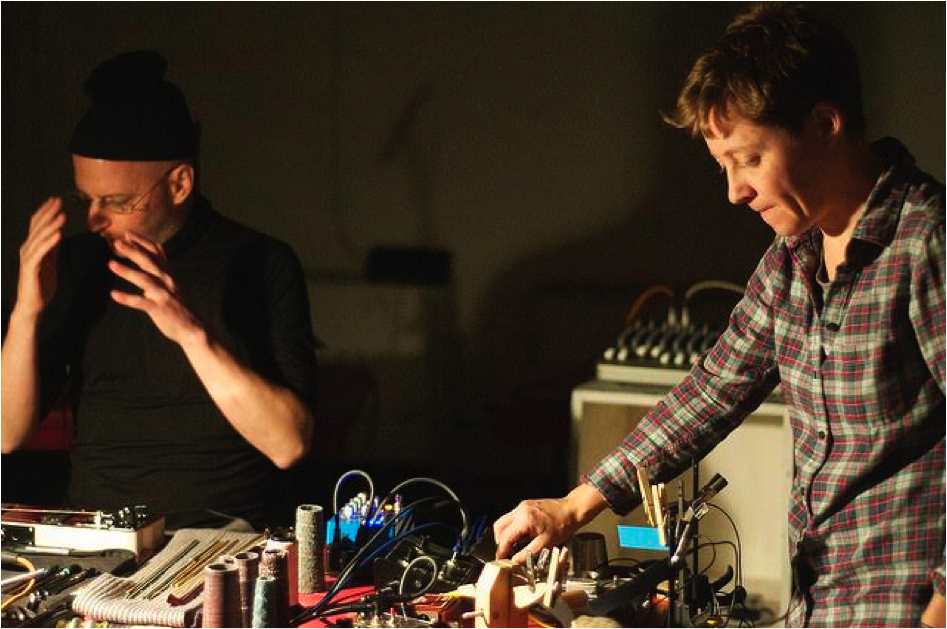 ANNE-F JACQUES/TIM OLIVE
Anne-F Jacques and Tim Olive use handmade, idiosyncratic instrumentation to produce and amplify detailed sound textures, from fine-grained to coarse. They share a tactile, lo-tech approach to improvised sound composition, manipulating diverse objects and materials in conjunction with somewhat unpredictable audio pickup/amplification systems to create a music in turns serene and agitated, pellucid and dense, fluid and gritty. Jacques uses small electric motors and Olive employs magnetic pickups; both sources are modified, manipulated and amplified. The hands-on nature of their instrumentation results in performances which are both sonically captivating and visually intriguing.

DUCHAMP
DuChamp is an Italian scientist, musician and curator based in Berlin religiously devoted to drone. Drone is related to a precise childhood memory: the sound of the hair dryer, which her mother used to fix her hair. That was the sound of care, bliss, and infinite love. Since her debut live in August 2010, she performed several time in Italy, Germany, Belgium, Turkey, Poland and in the US West Coast. She plays different instruments, among which accordion and baritone guitar, that she stratifies using loops and delays. DuChamp plays also with Will Gresson in Fausto Maijstral (La Station Radar), she plays baritone guitar in a very free form band called The Roman Catholics (with Andi Stecher), and she’s in the female no-wave trio Xantene. She’s the (sweet) half of the Berlin tape label Kitchen Leg records and, as together with her everlasting partner Alice Cannavà, she is the co-curator of Occultofest.