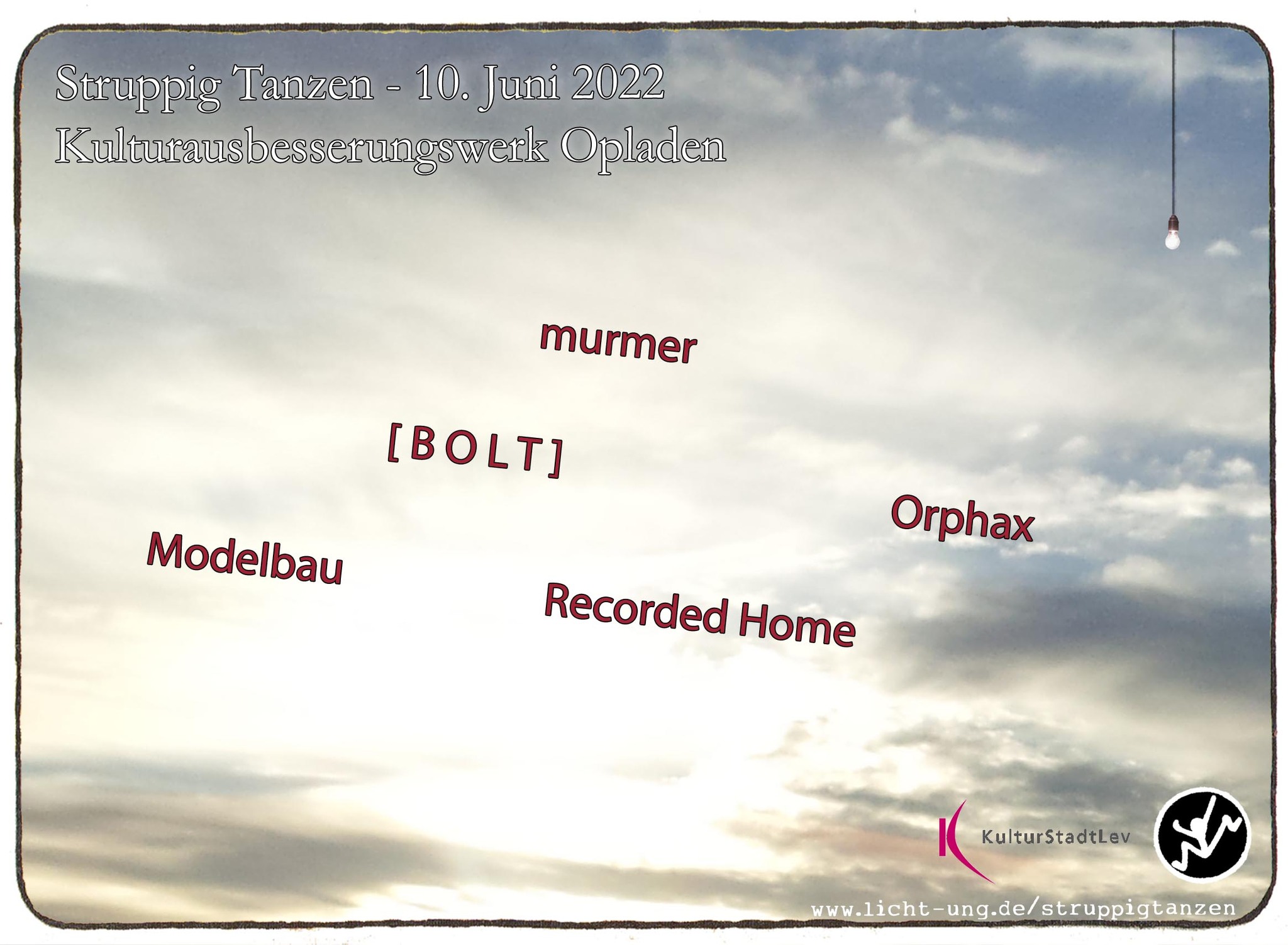 Orphax and Modelbau will both perform a solo set at the evenin Strupping Mahlen.

Bei fuenf Kuenstlern/Bands gibt’s diesmal einen Zeitplan:
Einlass 19:00
Recorded Home (Lyon) 19:30
Modelbau (Nijmegen) 20:10
[ B O L T ] (Duisburg) 20:50
Orphax (Amsterdam) 21:40
murmer (Metsküla) 22:30
Außerdem wirds einen kleinen Plattentisch von Auf Abwegen geben!
——-
murmer’s work is about small discoveries and concentrated attention; it focuses on the framing of the sounds around us which normally pass through our ears unnoticed and unremarked, but which out of context become unrecognisable, alien and extraordinary: crackling charcoal, a squeaking escalator, a buzzing insect, or one’s own breath. he works equally with spaces, objects, resonances, and people, in composition, performance, or simply collective action and experience, in exploration of perception via attentive listening.
—
Recorded Home: Projet solo ambient de Jean-Sébastien Nouveau (Les Marquises)
—
Emerging out of oppressive silence and ending up in ecstatic noise and drone, [ B O L T ] create waving sounds and crushing riffs. [ B O L T ] takes you on a ride across a pitch black meandering river of drones, doomed out riffs and haunting soundscapes. [ B O L T ] plays a musical style that takes black, drone and doom metal and mixes them together to create a sound of their own: A set in between the genres of instrumental drone, doom and metal.
—
Modelbau is Frans de Waard (Kapotte Muziek). Started out in 2012, operating small electronics, shortwave radio, iPad synths, Walkman and whatever else.
–
Amsterdam based musician and trained drummer Sietse van Erve (Orphax) was introduced to electronic music in the early nineties. After playing around with tracker software for a couple of years, he eventually recorded his first more serious attempts of music with beats and melodies in 1998, though soon lost interest in both these.
He started researching new sounds and new ways of working – always with an organic touch, often incorporating sounds that would be regarded by others as errors or mistakes. Considering life isn’t without errors either. During this search, he found his way into drone and microtonal music. As a result in his most recent work, time and spatiality become more important factors. The goal of the music is for the listener to lose the sense of time and place.
Live this is combined with room for improvisation. This way of working results often in an organic form of drone and minimal music.