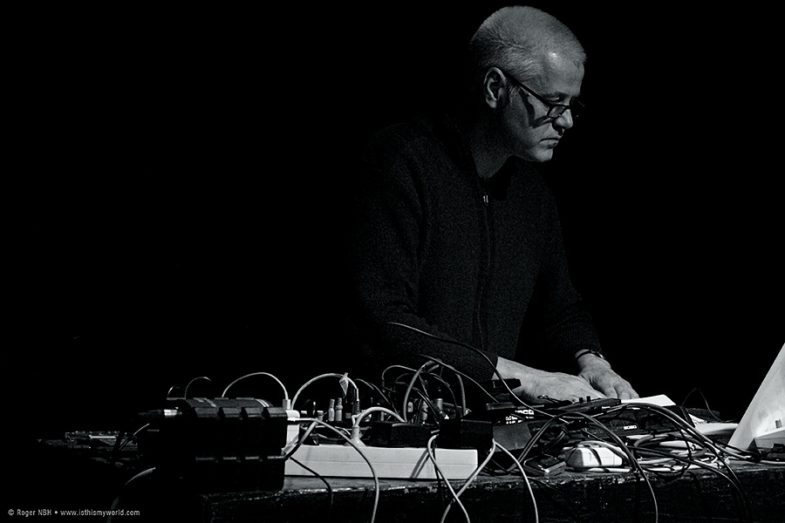 Frans de Waard is a man of many different projects and just as many names. For Moving Furniture Records he has recorded as Modelbau and Freiband.

Freiband was inspired by the tape-scratching of Asmus Tietchens on his CD ‘Daseinsverfehlung’, but here applied to an entirely digital context. Using recordings that were made for the new Beequeen, a record that has a lot of guitars, drums, organs, Frans de Waard started to rework them by scratching the harddisc. The result was warm, glitchy popmusic, in which the original instruments are barely recognizable, but sounding entirely electronical. Tongue in cheek, De Waard calls this popmusic, music made out of popping sounds, rather then popular music, but entirely inspired by De Waard’s love for popmusic. Since the inception of this new monikker, Freiband has played concerts in The Netherlands, Japan and a suprise gig at Mutek, Canada, 2001. The first CD ‘Microbes’ was released late 2001 by Ritornell, a side label of Mille Plateaux. In september 2002 the second CD ‘Homeward’ was released on Bottrop Boy and this is all with reworked popmusic from the late 70s and early 80s. Following this many more releases came out.

Modelbau is not the latest in a series of names used to create music, but it is indeed the latest one for a solo vehicle. Each of the names, and that includes my own name, stands for something particular, an idea, and something not found in the other monikers I am using. Modelbau is, like Freiband, not a proper German word (it should be Modellbau, but I thought that looked ugly) and as such is probably already a lo-fi name, and as such also very personal.
As a musician I have not a particular instrument, nor do I favour any technique, and I think one should use what is needed for a particular project or a piece of music. When I started Modelbau, I wanted to use various lo-fi sound sources, such as Dictaphones, Walkman, shortwave radio, small synthesizers and such like. This would not be a project for improvisation, but more or less planned pieces of music, all of which to be released in the digital domain only. That was in 2012. Now, in 2017, almost nothing is left of this outline, and yet the music is very much what I envisaged as Modelbau. These days Modelbau uses pre-recorded cassettes, iPad apps, sound effects, laptop, shortwave radio, small synthesizers, ancient 2bit sampling device; everything is recorded on the spot, as is, and without multi-tracking and very minimal editing (save for fades and mastering) released as downloads, but also on cassette, CDs and CDrs. Vinyl is only a matter of time.
Whenever Modelbau plays a concert (all of which are recorded) preparations are made, and these are also recorded; sometimes these preparations can have the length of a concert, but they can also be single pieces of a few minutes. All of these recordings are archived and whenever a release is prepared, the latest sessions are listened to again and again. ‘Does it stand the test of time’, is it still interesting.

Frans de Waard is also founding member of Kapotte Muziek, Beequeen, Goem, Wieman, WaSm, aswell as many solo projects such as Shifts and Quest. Frans de Waard has been producing music since the mid 80s, firstly on cassettes in the 80s and then on LPs and CD’s afterthat.