After his well received albums Koura and Caveman, Tasos Stamou returns with his third album for Moving Furniture Records Monoliths.

The occasion of this double album is to present the two different practices in my music, live performance and studio work.
Although phenomenally coming from a different place, it is a result of years of experimentations to bring a simple yet complete electroacoustic set up both on stage and in studio. The original idea was to compose or perform with acoustic instruments generating sustained sounds in a way that, although electronically manipulated, would retain all the organic and sensual qualities of traditional organized sound making devices, often called “instruments”.

This release overall is presenting my most recent attempts to collide these two sides of music production and to deliver a sonic journey to my personal engagement with sustained music. ‘Moving Furniture Records’ has been my platform to release this sort of music since the beginning of this journey.
While studying the art of prolonging a sound for long enough to physically affects the listener, yet complicated and narrative enough to stimulate the mind too, these exploratory sounds are inspired by the acoustic instruments’ sonic qualities, always under the influence of the distorting mirror/ magnifying glass effects of electronic manipulation.

It is great that Moving Furniture Records has a stable of artists, just as a proper label should have, exploring talent and such. For instance, Greek composer (London based) Tasos Stamou now presents his third release for this label. It takes the form of a double CD.
On one disc, we gave his studio works and on the other disc, live recordings. Over the years, he refined his techniques, using what he describes as “a simple yet complete electro-acoustic set up”, in which he tries to make it all sound organic. There are different instruments in the studio and on stage, and also the execution is a bit different.

In the two live recordings (one from 2017 and one from 2020), he uses a prepared zither along with “live guitar pedals effect processing”, and on one a tone generator and smartphone app, and on the other, a “self-modified Stylophone and Gen X-1”. In the studio pieces, the main instrument is part of the title, as we will see. The main difference is the level of control, I would think.

The three studio pieces are shorter and, for the lack of a better word, more coherent. It seems as if Stamou sets out beforehand what he wants to do, check all the parameters, maybe do a few takes (rehearsals), but committing to the ‘real’ recording. The element of drone music is never far away, be it if he uses goat bells, a Hohner organ or a toy-sized steel drum. Sometimes he uses previous recordings along with the proceedings, but throughout, I would think this is a ‘live’ recording, albeit one that was re-done a couple of times to get the ‘right’ take.
I enjoyed these pieces, which should be an interesting variety, from pure drones in ‘Chord Organ Drone #2’ to the chaos of ‘Steel Drum Drone’.

In the two live pieces, both just under thirty minutes, the playing is freer, with less control going on. Maybe it adds a slightly more improvised feeling to it. The recording is very much ‘live’, with the occasional cough to be heard. As I haven’t had the chance to see Stamou play a concert, I had no idea what to expect, and as such, it is interesting to hear this. However, if you ask me which I prefer, I must say that the studio side of his work is the one for me. There he creates, as always, pieces of refined, organic beauty.

Discovering this London-based composer’s adventurously psychedelic collages of traditional Greek music was one of 2021’s great musical pleasures for me, so I was very eager to hear this ambitious double album follow up to Antiqua Graecia.  As expected, it is a characteristically wonderful and unusual release, but it is also marks a detour away from Stamou’s impressive run of Greek-themed albums.  The theme of the aptly titled Monoliths is instead Stamou’s attempt to “collide” the two sides of his working methods: live performances and studio work.  By my estimation, it was a very successful collision, but it was mostly a behind-the-scenes one, as I would be hard pressed to determine where one approach starts and another begins.  As a result, the more immediate and striking theme of the album for me as a listener is that each piece feels like an extended experiment in crafting an immersive, complexly layered sound world from just a single recognizable instrument.  At least, that is how Monoliths unfolds for its first half, as the bottom drops out of the album’s hallucinatory feast of bells, organs, and steel drums to reveal a considerably more processed, abstract, and psychotropic second hour of drone-damaged mindfuckery.  That approach admittedly makes Monoliths a bit less accessible than some of Stamou’s more conventionally melodic work, but serious heads looking for a deep and sustained dive into otherworldly psych meditations will likely love this immersive tour de force.

The opening “Bells Drone” sounds deceptively like it could be layered field recordings of wind chimes at first, as bells of different sizes amiably jangle and clang for couple minutes before any real evidence of Stamou’s hand starts to emerge.  Soon, however, some tones start to linger supernaturally and the mood darkens into uneasy shadows of dissonance.  It is quite a wonderfully hallucinatory and entrancing piece, evoking an ancient ritual in a cavernous subterranean temple revealed behind a dissolving reality.  While it is the shortest piece on the album at a mere 13 minutes, it is nevertheless a solid representation of the album’s first half: a simple and minimal theme gradually transforms into a vividly multi-dimensional dream world.  On “Chord Organ #2,” for example, an organ drone slowly evolves into a Catherine Christer Hennix-esque nightmare of dark harmonies before unexpectedly resolving on a note of sundappled transcendence.  “Steel Drum Drone,” on the other hand, steadily becomes something akin to a lovesick tropical Steve Reich.  That one is another favorite, as I am quite impressed with how Tasos weaves together patterns of plinking and bleary steel drum melodies into a thing of woozy multi-layered beauty.   In fact, I love every single one of the opening three pieces, but they turn out to be a mere prelude to two pieces in which Tamou goes totally bananas.  In the first, “Supernormal,” Stamou mingles a chirping electronic drone with squealing and sliding strings en route to an harrowing mindfuck that calls to mind a goddamn demon summoning (the final stretch of oscillating synth thrum is especially choice).  The closing “Synapse” improbably features some even more gnarly sounds, passing though such colorful stages like “menacingly gelatinous bass throb,” “an undead gamelan ensemble wanders the deserted streets in search of their next victim,” and “a simmering and intense prepared piano performance over quasi-industrial rhythmic loops.”  This is an absolute feast of an album: five great longform pieces in a row spanning nearly two hours.  Most days, I admittedly prefer the more meditative/ritualistic first half to the more nightmarish second half, but Stamou was swinging for the fences with every single piece on this album and the result is a monolithically stellar release.

Double CD limited to 200 or digital available in our webshop. 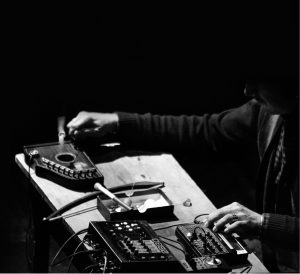 During a decade of sound performances and recordings, Tasos Stamou has developed a unique style of live electroacoustic music composition. Long and continuous pieces are created in situ using a “portable electroacoustic music studio”. His work explores the space between ancient and contemporary transcendental music, using both traditional and advanced media.

He has performed across Europe and the U.S. in festivals and venues for innovative sound (Incubate Festival, Cafe OTO in London, Supernormal Festival, BENT Festival New York, Cave 12 in Geneva, Sounds of the Underground Festival, Ausland in Berlin, CologneOFF Festival, Onassis Cultural Centre in Athens, and many more).

Although his music is inspired by different contemporary and traditional genres (free improvised music, musique concrète, noise & drone, folklore and ritual/tribal music) his main influence is personal states and experiences of the sonic environment, such as early childhood memories (“Infant”, 2007), the loss of a beloved person (“The return of the long lost one”, 2013) or the exploration of a rural location (“Musique con Crète”, 2018).
Tasos is also developing a series of visual art; showing his work at occasional exhibitions/installation shows and illustrating media. 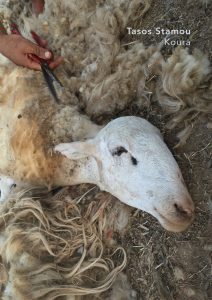